The new edition of KOsmoPOLityczny project kicks off 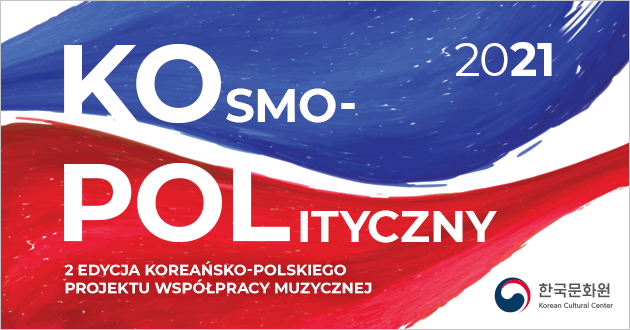 In March, the second edition of the „KOsmoPOLityczny” project will kick off. The South Korean-Polish initiative promotes cooperation between musicians from both countries. The most stand-out jazz artists will take part in it – Korean vocalist MinJin Seo and Polish guitarist Rafał Sarnecki. To make up for the rescheduled tour in Poland, the music fans will receive a documentary movie and music videos with new tracks, recorded on-line.

Organized by Korean Cultural Center in Poland, the “Kosmopolityczny” Project started in 2019 to introduce more creative collaborations by Korean-Polish musicians. In cooperation with the Jazz Po Polsku, Korean musicians and Polish musicians has been invited to the project in 2021, under the name of “MinJin Seo Sextet”.

MinJin Seo Sextet is an international jazz group which features musicians from the Republic of Korea and Poland. MinJin, the bandleader and singer of the group, met the drummer Piotr Pawlak and guitarist Rafał Sarnecki in New York where all three of them used to live. They performed together in jazz clubs of Manhattan and Brooklyn. Eventually they moved back to Poland and South Korea, however they didn’t stop creating music together. In 2019, together with bassist Wojciech Pulcyn, pianist JeongWon Lim and harmonica player Jae Hwan Kang, they gathered again and started an international collaboration. The repertoire of the group includes traditional Korean and Polish songs arranged in the modern jazz style as well as some original compositions of the band members. In the Fall of 2019, the group went on tour in Korea performing at the Seoul Forest Jazz Festival and jazz clubs all over the country. In 2020 the sextet was planning to tour in Poland, but unfortunately all the concerts were cancelled due to the pandemic.

„The global isolation inspired us to create completely new, simultaneous form of collaboration in two separate corners of the World. Our tour was supposed to start in November last year in Poland, but it was withheld. Instead of hosting real concerts, Korean Cultural Center suggested an on-line project. So, in order not to lose contact and inspiration, we decided to do a studio project carried out fully on-line. For music videos, we recorded a total of four tracks, two of those being our original compositions and the other two being traditional pieces in new jazz arrangements – Stanisław Moniuszko’s „Prząśniczka” (Spinning Wheel) and the most known Korean folk song – „Arirang”. The recordings took place in Jinju and Warsaw studios. For the documentary movie, we were accompanied by a film crew who recorded the whole process. The movie will include the scenes of recording sessions, the creative process and communications between band members in Korea and Poland, and the interviews” – said Rafał Sarnecki. Maciej Głowiński is the films director who has been with the Polish jazz musicians for many years on their Asian tours.

The final effects of the project will be available to watch on-line from March 19th at the KCC official YouTube, Facebook channels, and performing arts program portal (kperformance-ckk.org). The project also includes an on-line panel discussion with participation of Korean and Polish musicians. The event will be hosted by Piotr Jagielski, a journalist and writer, author of a novel „Bird żyje” (2010) and a non-fiction book “Legia Mistrzów” (2016) for which he was awarded the Warsaw Literary Premiere Award. The panel will be availeble for streaming live on March 26th at: www.youtube.com/kulturakoreanska

Minjin Seo is a South Korean vocalist. She graduated from applied music at the Baekseok University in Cheonan and in Fall 2013 enrolled to Master Studies at CUNY Queens College in New York. Her professors were: Dee Daniels, Alison Wedding and Charenee Wade. After graduation MINJIN stayed in New York performing with her own project, recording a single with a renowned singer from China – Annie Chen. At the same time she was studying jazz singing privately with the vocal legend Nancy Morano. In July 2016, MinJin recorded her debut album entitled „Filled with Song”. Currently MINJIN lives in her hometown Busan in South Korea. She performs with her own band and with other groups as featured guest artist. She teaches vocals at Universities in Busan and Daegu. In year 2019, among others, MinJin toured Korea together with Polish guitarist Rafał Sarnecki and his quintet. Her repertoire already consists of more than 150 songs, which is still far from her dream goal: to repeat the legendary Ella Fitzgerald’s achievement and sing all songs included in The Complete Ella Fitzgerald Song Books. In July 2019 she opened her own private music school in Yangsan.

Rafał Sarnecki – Originally from Warsaw, Poland, Rafał Sarnecki is a jazz guitarist and composer currently living in New York. In the thirteen years that Rafal spent living in the Big Apple he has become one of the most sought after jazz composers of his generation. As a leader of his own projects Rafał has toured China, South Korea, Malaysia, Chile, Israel, the East and West Coast of the US and many European countries. He has shared the stage with many top names from the US jazz scene including: Ben Wendel, Ingrid Jensen, Alex Sipiagin, Joel Frahm and Gary Thomas, to list a few. Rafał has so far recorded four albums as a leader. Two of them: Song From a New Place (2008, ARMS Records) and Cat’s Dream (2014, BJURecords) were nominated for the Fryderyk award, the Polish equivalent of Grammy. The Madman Rambles Again (2011, Fresh Sound) was selected as among the best jazz albums of 2011 by Hi – Fi magazine and All About Jazz (Dave Sumner’s Best Releases of 2011). Rafał’s latest album Climbing Trees was released on Outside in Music on July 27, 2018. Besides being active as a bandleader Rafał is also involved in a variety of New York based groups such as: Lucas Pino No-Net Nonet, Annie Chen Group and David Bertrand Quartet. Living in NYC Rafał received his BFA degree from the prestigious Jazz & Contemporary Music Program at the New School and his MA in music performance from the graduate jazz program at the CUNY Queens College. While staying in the US in 2015 he received a Ph.D. in composition from the Fryderyk Chopin University of Music in Warsaw.